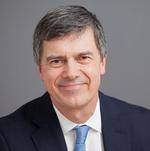 He has successfully led safety, sustainability, ESG, risk and regulatory matters for both National Grid plc and Anglo American plc, two global FTSE 100 companies, as well as for Network Rail, transforming their performance. He has experience of M&A in the UK, US, Latin America and Africa and led the subsequent integration of operations.

As Chief Executive of DVSA, he led the turnaround of a £400m government trading fund, winning awards for its digital transformation. DVSA saw the greatest improvement in staff engagement across the public sector during Gareth’s tenure.