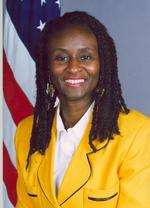 Robin served as one of the US Government’s top diplomats on African issues over a long career in the United States Diplomatic Corps, reaching senior positions, including Ambassador to the Republics of Nigeria and Congo, National Security Council Director for Africa at the White House and U.S. Permanent Representative to the West African Regional Organization ECOWAS.

Robin is currently Non-executive Director on the boards of SGI and Eurafrique, Nigerian solar and energy companies respectively, and Songhai, a Benin based NGO agricultural project. Given her ICT academic background, she is also Non-executive Director for VGG, an ICT company, and previously for INT Cell Towers, both Nigerian companies. In 2012, Robin was appointed as a Trustee at Robert Morris University, a private university in Pennsylvania. She has also recently been appointed as a Senior Advisor at Concordia, a global non-profit, non-partisan organisation dedicated to actively fostering, elevating and sustaining cross-sector partnerships for social impact.